Cats like to be entertained. This is true in general, but for cats who live inside even more so. If you work all day, you will come home to a well-rested cat who won’t care at all that you’re tired and exhausted and would love to spend the rest of the evening on the couch. If you don’t challenge your cats, you’ll realize that they’ll find something to do regardless, like scratching up your furniture, chewing on your plants or crashing about on the hallway when you finally made it to bed. Our cat Garrus also has a nice toy he likes to get out on occasion, preferably at 3am or 4am: the sink strainer in the shower. It’s made of metal and makes an awful noise when he’s bored and kicking it about in the otherwise empty apartment.

In order to avoid such nighttime surprises, it’s better to play with your cat or to give them a toy they can play with alone. Here’s a list of different toys we tried out with Garrus and Wrex:

I hope this helped you get a good overview of the various kinds of cat toys out there, and maybe you’ll buy some of these toys for your furry friends. Even if some of them might not hold your cats’ attention for long, it’s always good to give them some variety. And if they don’t care at all, your local shelter or your cat-loving neighbor might have a cat who likes it more.

[…] – not just for five minutes before you feed them. Most cats love wand toys (see the article Cat toys as tested by cats), maybe add a cat tunnel – you don’t really need much more. Garrus and Wrex also love it […]

[…] is to extensively play with your cat before you go to bed. 10 to 15 minutes of play-time with their favorite toy and your cat will be exhausted and maybe sleep in the next day. If you reward your cat after […]

A Short Guide For Clicker-Training Your Cats

Can you train cats? What is clicker training? Find out what you need to know and how to do it right!

I'll show you how I gave my cats some vertical space and built them a cat walk with Ikea shelves. 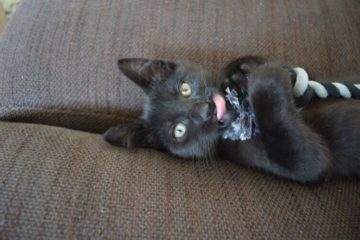 12 Nice Things You Can Do For Your Cat