Why Do Cats Purr?

My two cats are brothers, but apart from their black fur with a white spot at the neck, they couldn’t be more different. Both of them like to purr a lot, but Wrex has a calmer purr where Garrus purrs like a helicopter about to take off. Sometimes it almost sounds like the cooing of a pigeon. I find this fascinating, so I looked into the reasons of why cats purr, when they purr, how they purr – and I found a few videos of purring cats as well.

Why do cats purr?

Cats purr to strengthen their bones, to support their healing process, to calm themselves down when they are stressed out and as part of their social interactions. If cats purr when you pet them, they use it to express contentment. Sometimes cats purr to let others know that they are not a threat.

Cats purring can have an effect on humans as well: Scientists have found that the frequency of a cat’s purring has a positive effect on the healing of tissue and on bone density. The vibrations also excite their muscles. There are theories that purring can counteract a cat’s long periods of rest. If you have an indoor cat, you can easily watch it snooze for most of the day. The theory goes that purring counteracts these to help them keep up their muscles and their bone density.

The bone density thing sounds a bit crazy, but it’s actually been proven. Fascinating – not least because this knowledge is now used for space travel. Astronauts tend to lose their bone density at a rapid 12x faster because there’s no gravity in space. There’s no vibration therapy that counterbalances this and helps keep the astronauts’ bone density up.

When do cats purr?

Most cat owners will have noticed that cats often purr when they are content – e.g. when they are snoozing on your lap or when you’re petting or brushing them. So they purr when they are happy and relaxed. Wrex purrs a lot when you pet him, and sometimes he’s so pleased he will start to drool.

Sometimes cats will purr when they are stressed out or afraid, which scientists believe is because they want to calm themselves down as well as signal to anyone else that they are not a threat. So they purr to prevent an attack.

Female cats will also purr before they give birth, and little kittens can be heard purring shortly after they were born when they are suckling – presumably to signal to their mom that everything is fine.

I’ve also read that cats will purr when they are dying, presumably again to calm themselves down.

And lastly, some cats purr when they’re hoping to be fed by their human. Ours don’t do that, however – they meow instead.

How do cats purr?

It’s not entirely clear how cats produce the purring sound. There are many theories including the hyoid bone, the larynx and the diaphragm, or two flaps of skin behind the vocal chords.

What is definitely known is that cats purr with a frequency of roughly 25 Hz to 40 Hz. For comparison, the mains hum you might sometimes hear in your loudspeakers usually hums at 50 Hz. If you’re not sure what a Hertz is – that just means once per second. So if your cat is purring at 25 Hz, that’s 25 vibrations a second. Wikipedia also says that rarely, a cat’s purr can also be as low as 20 Hz or as high as 150 Hz. (At soundandrecording.de you can check out what different frequencies sound like.)

As mentioned before, Wrex has a normal, loud purr and sometimes he will drool while he’s doing it. That’s how I imagine a typical cat purr. With Garrus, it sometimes sounds like cooing, almost like a bird. Loud and content, really – he often purrs very loudly when he’s allowed back into the bedroom in the morning and he crawls under the sheets to nuzzle against a warm body. Since all of this happens entirely voluntarily, I assume that this loud cooing is also an expression of contentment. Possibly the only thing differentiating Wrex’ and Garrus’ purring is the frequency of it. The higher the frequency, the higher the tone, and a cooing sound is pretty much a purring sound, only higher. (This is all my very non-scientific approach to it all.)

It’s surprisingly contested whether or not big cats like tigers, pumas or lions can purr. Some say they can’t purr at all, others say they can only purr while exhaling. Thanks to the internet you can watch countless videos of big cats purring, however, or at least you can watch them make a sound that very much resembles purring. This is a cougar purring:

And this is another big purring cat, a cheetah:

As you can see, big cats are not much different from out little cats. Their purring is just a lot louder.

I hope this gave you a little bit of an overview over a cat’s purring and you know now why, how and when they do it. 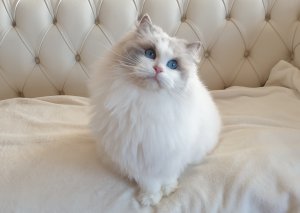 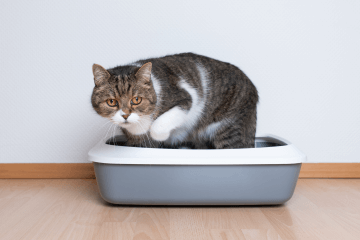